Eric and the Quest for More Coffee, pt.2

Posted in the "aside" category.

There were three submissions via the Google Form, and a couple more form messages via social media. Honestly, I had debated either a nondescript or far more overt mug w/ the likeness of one of the more iconic of H.P. Lovecraft's imaginations, but this seemed a bit over the top.

The problem with the last two was the fact that these two, which I both have, are travel mugs / tumblers. I use them whenever I make coffee at home, but not when I'm in the office after I make it to my desk (aka- not after my first cup). I use a single serving french press at my desk, so as not to drink the comparative sludge which comes from the office coffee machine (drip coffee which sits on a burner and tastes horrid).

After realizing that my retired "trusty mug" was liked so well due to its otherwise unassuming nature of being both awesome and simplistic, making it able to do its amazing things, yet still not stand out in a crowd, all flashy like. What I went with was an attempt to return to this elegance in simplicity. Please join me in welcoming my coffee mug 2.0. 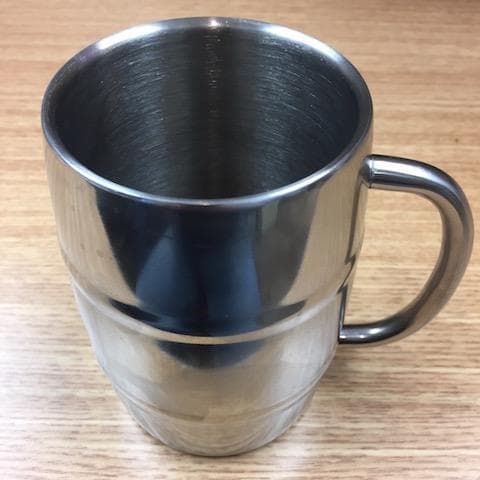 It's a double walled, stainless steel mug bearing a passing resemblance to a beer mug; awesome, yet relatively low key (and makes no overt claims at seeking inebriation). My only issue is that it's a bit larger than my last one, with a surprising 17oz capacity. I suppose I'll just need to drink more coffee. ☕️