This topic is so awesome I turned it into a video for Notes in 9, check it out.

It's no secret I'm a strong advocate for segregated application design practices. In my quest to "make everything work the way I want it", I've chosen a front-end framework that my ui-level application is written in, structured my primary application layer into RESTful Java HTTPServlets (DesignerFacesServlets, specifically), and life is generally good. My endeavors in this area are for a few, specific reasons, namely:

That last one is probably foreign to a lot of people, but as one of two web developers on my company's organic staff (up from one, and the only Domino/XPages developer), this means I want to unify efforts across our application platforms and also make things easier to plug a contract developer into. It speeds up their efforts, makes it easier to plug into source control (for not just tracking, but also support purposes), and overall will aid my sanity (I hope).

A Segregated Approach for the Front-End

I've spent a considerable amount of time covering the back-end approach that I'm migrating to; just look at all but the last two-part piece in my series on Java HTTPServlets with XPages. But what if we hire out some work to be done on the front-end; wouldn't it be nice for that developer to work on only on that front-end, without any need for other setup? I think it would and this ought to outline how this can be achieved fairly quickly.

A Sample Data Set of JSON

Since I'm interacting with my data via a RESTful HTTPServlet, this makes things rather easy for me to create one of the required parts. I need to have a sample set of data, which I can interact with to confirm/deny my interactions are well formed and test with some form of data. In this case, I'm assuming this is for making changes to an existing application, but if it's a new one, someone would want to sit down and define a sample set of data; this is normal operation for myself and, I expect, most developers. For my use case, I copied the network response from my .../xsp/<collectionName> GET call into a db.json (I'm using housesDB.json, except for my GIFs below, which are another source, but follow the same structure) file. This will need one minor change, and that's to wrap the data array into a slightly different format, so that json-server can read it correctly (I stripped out my usual request block with any params and the error true/false, for simplicity).

After your minor transforms, I reocmmend sanity checking your data with a tool like jsonlint.com. You'll note my collection is a member of an xsp object (to route similar to my production path). Here's one I prepared earlier:

A Note on Domino Data Service

As the @unid property won't register as a valid json object property, you may need to transform that to unid. My HTTPServlet was already using unid, so it works out quite nicely ð.

So, you may be wondering what json-server is. Json-server describes iteself as:

...a full fake REST API with zero coding in less than 30 seconds (seriously)

To install it, you will need to have Node.js (and npm!) installed on your machine. I recommend installing this globally, so you won't need to maintain a copy of it in some project folder. To do so, from your command line, run:

This will install the current version of json-server. What makes this all so exciting to me is that after issue (feature request) 103 was completed, the id property is now configurable. So, assuming a relative path to the db.json file, running the following gives you a functional back-end mock with the file above:

We're invoking the json-server command (that's right, npm installed it into our PATH, making it available as a global command), we're configuring the id to key off of the unid property, we'll be watching the file for changes, and it's pointing at the db.json file. By default, it will load on port 3000, but that's configurable as well. See the json-server read me on GitHub, or run it with no params or with -h for a listing of what's available (port is set by --port or -p).

Here come a few examples, in all the glory an animated GIF of a REST API client can give.

You'll see that the default page at the port json-server is serving on, that there are a couple things, such as a hyperlink to the collections, overall "db", and link back to the readme on GitHub. In the console, we can see that we can even take a "snap shot" of the "db"; this will save the data at that point in time to a separate .json file. 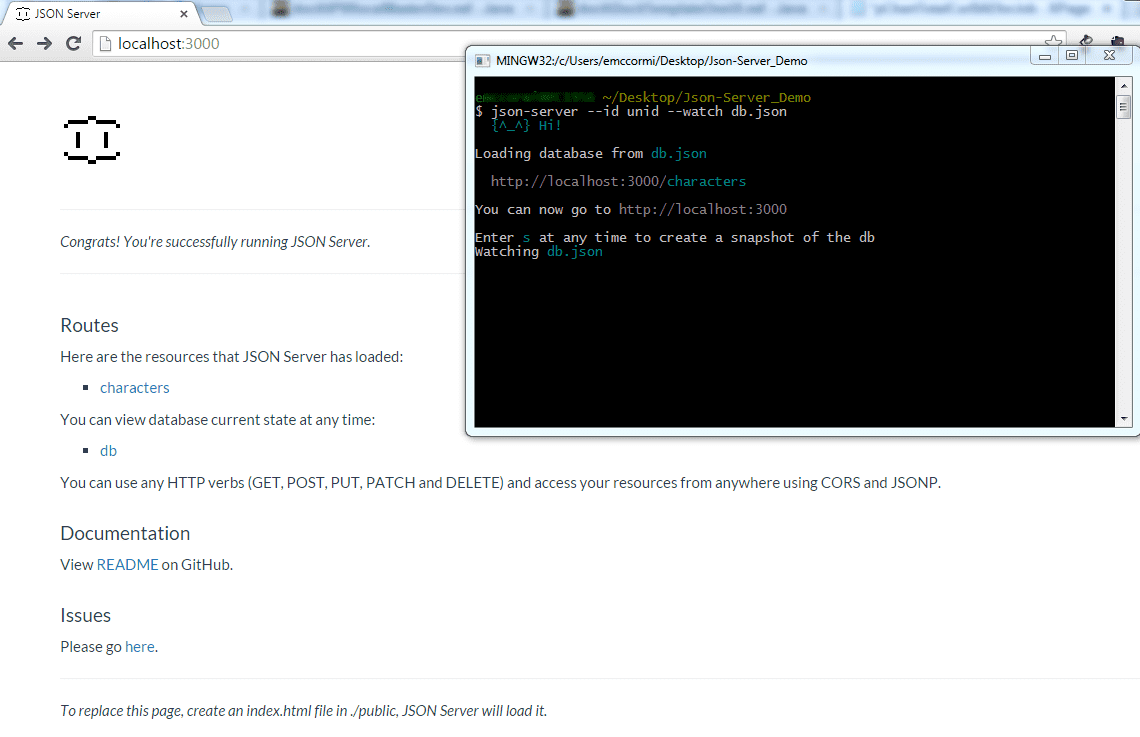 I'm using the Advanced REST API Client for Chrome, as I'm used to it. You may wish to check out Postman, another Chrome app, or you can load from your JS console or, as I'll show later, actual web content.

The part that makes this all so awesome, is how extensible this all is. For example, if I were to create a folder called "public" in the same path I'm running json-server from (with my db.json), json-server will pick up on that and display that set of contents instead of the default helper page. How is this useful? Well, check out this nifty example from my "App of Ice and Fire". You'll notice that the type of dataset is changing slightly (to be the same from that app), but otherwise it's the same.

I'm going to demonstrate this last bit with my 'App of Ice and Fire' app. I'm setting the new db .json file in the root of the project folder and am symlink-ing a public folder to that app's NSF/WebContent/ path (where my static files reside). To do this on a *nix machine, change directory to the project folder and type ln -s public NSF/WebContent/ and for a Windows command prompt, mklink /d public NSF\WebContent (if using the default Windows command prompt, you may need to "run as administrator" to get it to work). I added a symlink to my repository, which GitHub ought to respect, but I don't want to duplicate the contents so it's in the .gitignore file; just know that when using a Git repository, all symbolic links should be relative.

With that in place, the only thing standing between myself and a working, non-Domino server, local copy of my static assets is to map the following into a routes.json file and add the parameter when I call json-server, like so:

This will make my NSF-relative calls to /xsp/houses resolve to the houses that json-server is providing. Check it out. Our final command to start things up is:

I hope you can see the benefit of being able to work on your front-end independent of the server. With a little tweaking (I have some code in development that I would remove for production, checking to verify the formatting of my response in my houseApp.js to forcibly wrap my collection and document respectively), I'm now able to focus on all the ui-level application without needing to even touch my development server. To cross apply, I only have to paste into my WebContent path, without worrying if I'll break anything on the server. All in all, it's another good tool for the toolbox.

You can find these updates in my App of Ice and Fire repository on GitHub. Please feel free to check it out and play with it. Until next time. 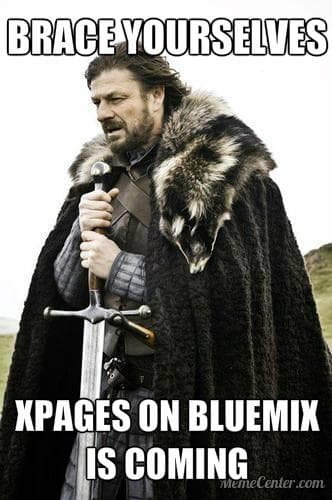