Per usual, I've had a little break between things and decided to catch up with a bit of a summary of some recent things that each didn't necessitate their own post.

For starters, I'm honored to be named an IBM Champion in Collaboration Solutions (/ Social Business) for the third time. This would be a hat trick in (ice) hockey 🏒. I'm happy to be recognized with a group of people, developers and more, who are passionate about both their work and the platforms they work on. There are 123 people named for 2017, 44 of whom are new (79 returning).

For 2017 I have a new distinction in which I'm happy to be named an IBM Champion for Cloud 🎉. 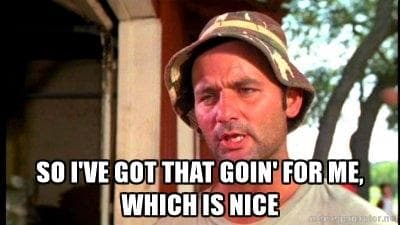 The only big downer in my life right now is that I won't be attending IBM Connect this year. It was a great time for the last two years for me and I hope to attend again. I do believe that there's an interesting bit of initiative on IBM's part that the change in locale involves heading to San Francisco, which is home to a great amount of the emerging side of technology. It should be a great time and I'm sorry to be missing out on seeing familiar faces and presenting on one of my favorite topics. With any luck, I may be back to it next year and hope everyone has a great time.

I feel compelled to hold off on my "year in review" style posts until after the new year, mostly on account of not wanting to engage in too much self-aggrandizing my personal efforts.

I also started, then held back, a project which didn't receive enough attention from me, making it be delayed until I feel ambitious again; I'm sure it will come back, but once it fits in with my timing again. I don't have enough time to do everything.

For developers, if you're curious as to such things, githubreportcard.reflect.io was recently published, making for an intriguing look at a person's GitHub contributions.

Wes Bos recently released his javascript30.com course for free, which after the first week has been pretty good. I recommend it to anyone looking to keep their JavaScript skills sharp or are looking to learn a little bit from how another experienced JS dev does things.

As far as other news goes, I've gotten my first Yeoman generator to version 1.0. I'll have more information on it before too long, but the short version is that it can help a developer scaffold an XPages compatible On Disk Project for an application, generate XPages or Custom Controls, Java Classes, including as a managed bean, and the last feature added for v1.0 release was the inclusion of the ability to scaffold a CustomServiceBean for use by an xe:restService control.

Contributions are welcome! I have a basic road map for the immediate future, but I am open to suggestions, contributions, and even just discussion. If you're looking to help but don't know where to get started, please hit me up on Twitter or in the XPages Slack chat.

Another yeoman generator I put together (finally) was of a genericized version of the slide deck I used for my Chalk Talk from IBM ConnectED 2015. It's called generator-presto-preso and while I'll likely continue to make some minor improvements, Pull Requests are welcome.

I'm currently planning on a couple of follow-up features to generator-xsp and fully expect to record a video for Notes in 9 on it before long. I also am planning on a revisit to my App of Ice and Fire for a short series on updating an application's front-end to a modern build process with Domino applications. After all that, we'll see what the year brings!

If you have other questions on things, feel free to Ask Me (Nearly) Anything in my AMA repo on GitHub.