Handling Data in a Servlet

As promised at the end of the last post (in this series), this post will walk through the entire life cycle of data reception and response handling. This is where my ConnectED demo app-that-never-was comes in, we're going to build part of it. We're going to create an endpoint which governs the provision of a collection of the houses of note in our fictitious land of Os (it's out west). I'll be providing the com.westeros.servlets.HouseServlet class, which is an AbstractXSPServlet (previously demonstrated), to my ServletFactory.

Note: I'll be sticking to the same, vanilla Java approach I've used previously in this series. I'll outright say it though, it'd be great to see how some of the processes involved in the setup can be automated and made easier, be it by @ annotation or via other frameworks. I fully invite those more experienced in these methods to show us the way.

The endpoint will accept (and return) only application/json. Here's the structure it'll take.

It's straight forward and follows with the approach I've previously laid out. Do note that to create a new entry, it will be taking a POST against the collection, whereas the individual entry will be accessed via GET to send the existing document, PUT to update partial information, and DELETE to do the obvious.

In order to better process my request data and process for my response, I've segregated my Collection and Record operations into separate classes; HouseCollection and HouseRecord, respectively. Here's the down and dirty of my main servlet class:

The collection will iterate records and return the JSON array of objects representing each house. I'm going to wrap the array as a data element, to give some mild metadata I usually provide, including a simple version of any request parameters and, lastly, an error flag (with an error message, if the boolean error property is true); this is consistent with what I've done before.

Below, when I handle the reflection of JSON to a Java Object (in conjunction with the ), I will show how to use both. Here's the providing of a collection, pulling entry information from a ViewNavigator into the Java object that will become the JSON string. I'm going to use a HashMap as my base object, with an ArrayList which will hold the individual data entries.

While it's certainly a lot of lines, I believe it to be fairly straight forward. In the HouseCollection class, there are defined three methods; doGet, doPost, and handleUnexpectedVerb. These are invoked by the main HouseServlet class, which calls the appropriate Collection or Record method, based on the full request path info and request method. I've included both the com.google.Gson and com.ibm.commons.util.io.json method, the latter is just commented out.

You can find how I'm able to POST a new document in the doPost method here, but I'll cover that process in more detail further down.

Handling the individual records, the NotesDocuments, gets more fun. I'm not just stepping through a NotesViewNavigator and for me personally, this is why we should be embracing our Java roots on Domino/XPages. Say I have myself set up for using a managed bean to represent my documents. Aside from the Notes/Domino API specifics, we're dealing with an otherwise plain Java object, in memory, to represent our data record, with which we interact. Using that same bean, I'm able to interact with it the same in my servlet as I might through the XPages UI. The biggest difference is that it's as a POJO (plain ol' Java object), as it's not managed, not defined in my Faces-config and has no "scope"; it'll be created/loaded, modified, and saved as fast as the servlet responds.

Obviously a delete operation is just a delete and we've covered GET, but the PUT is where I had fun with things. The POST above assumes an entirely new object, but with the PUT as I've implemented it, allowing for full or partial replacement, I need to instantiate the existing record into an object and then pull and compare/update any values. Just as I'm iterating the HashMap's values in the Collection POST, instead of just filling the values, I'm comparing the values and replacing as needed, inside a while loop, iterating the Map.Entry<String, Object>; (pair) values, like so:

Uniqueness of Using an Abstracted Document

This concept relies on having an object model class. The modeling of my house object does what a bean does, has properties which hold values, and interacts via getter and setter methods. For my app, I'm using an (older) implementation of the OpenNTF Domino API; specifically the AbstractSmartDocumentModel, as found in Tim Tripcony's How Ya Bean application and affiliated Notesin9 videos. This is to automate the getter/setter methods (it specifically ditches get/set PropertyName in favor of get/set Value). It also means that my app is a bit more portable (full project coming to a GitHub repository near you, soon!).

I also create the JSON with the Gson library, as I've covered both the Gson and com.ibm.commons.util.io.json approaches before, when it comes to creating a JSON string, so I won't repeat myself here. The only thing of major difference is to build out your response into a Java object, then use a com.ibm.commons.util.io.json.JsonGenerator's toJson method.

An Object Model for (Almost) Everyone

An object model, for my purposes, is a bean. It provides the definitions for what data to store and in what format. It is my preference to keep any additional business logic, such as notifications (emails, etc) or validation, in a separate class, though this isn't necessary.

If you're ever looking for help in generating a POJO from JSON, I recommend checking out jsonschema2pojo.org. As I'm an avid user of Gson and Apache Commons, the options I select are JSON (not JSONSchema), Gson, Use double numbers, Use Commons-Lang3, and Include toString; like this: 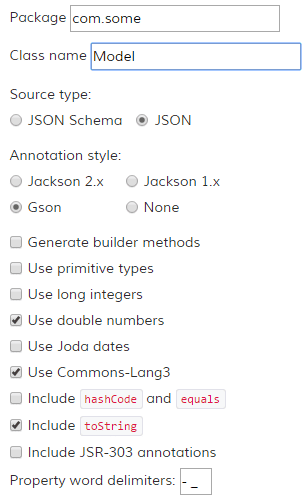 As I mentioned in my caveat above, as my HouseModel extends AbstractSmartDocumentModel, I don't have the usual get/set Property methods, but rather getValue/setValue; since this is the case, reflecting my received application/json content from the HttpRequest directly into my HouseModel for a new instance, meaning that I have to do some processing of that data to fill a new instance of a HouseModel. Since I know the data format I'll be expecting, I'm going to read everything into a HashMap<String, Object>, then populate my HouseModel from that. I could probably write my own GsonBuilder to account for this difference, but I'm not going that far into things.

To demonstrate why I'm using an abstracted model which doesn't conform exactly to bean conventions (the getter/setter methods being replace by a universal getValue/setValue, for instance), have a look at the simplicity of my HouseModel class.

That's it, nothng else. This should be the hallmark of why you should go check out the OpenNTF Domino API right now. As I said already, this keeps me from directly reflecting via Gson or IBM commons JSON, but I can live with that for this level of simplicity.

To read in the data contained within the HttpServletRequest's body, we need to get a handle on the ServletInputStream. More of that below, in the example.

Performing the fromJson (reading the JSON string into an Object) can be done by either com.google.Gson or com.ibm.commons.util.io.json. Both work well, and I have my preference to Gson, but something I found out in doing it both ways was that I rather like the com.ibm.commons.util.io.json approach for a particular reason. In my class, visible in the above Collection POST handling method, I'm creating my consumed request data first as a HashMap<String, String> so that I can iterate the values and build out my appropriate object; this works, but one nicety of the IBM JSON package is that it is easily created first as a JsonJavaObject, which is similar but provides some conveniene methods for property access.

Instead of iterating the bytes of the content from the InputStream, we can use another Apache Commons utility, IOUtils, to automate this for us. Here's a reflection of a traditional bean (with the usual getter and setter methods) from the InputStream.

As mentioned above, here's how I'm reading my values into a HashMap and then filling my object with the setValue methods.

You'll see I'm relying on the response code to communicate the success. This is what jQuery and AngularJS key off of to determine the success/fail of the network event for their respective callbacks. In my error handling, I respond with a status code of 500, and application/json content in the body, to the effect of:

This once again highlights the need to document your API. It's okay to use the status codes for primary information, but definitely at least put some error messages in for a failing operation.

Note: On PUT and DELETE Methods

I ran into something with this, which I wasn't expecting. I had to enable PUT and DELETE methods in my Domino Designer while testing locally. It seems that my PUT and DELETE calls were being hijacked and consistently throwing 405: method not allowed calls. This threw me for a loop, as my development and production servers didn't have this issue. My suspicion is that they were already enabled, via enabling of the Domino Data Services, previously.

To enable PUT and DELETE (or PATCH, though I've avoided it for simplicity's sake), you should do so by any of:

Using the X-Http-Method-Override seems silly, but is pretty easy to use. Here's a jQuery.ajax example of a PUT request being sent as a POST, taken from a StackOverflow answer on the subject:

As for the path I took for my personal development environment, I added the following line to notes.ini:

I initiallly didn't see it work, as I added it to the end of my file. Once I placed that directly under where I define my local web preview port (further up the file), it started to work without issue. Must be the ghosts in the machine.

I've covered a whole heck of a lot in this post. We split our servlet to handle collection operations (getting the collection and creating a new entry) and the record operations (getting the full content of a single record, updating a record in part or in whole, and deleting records) and worked with a consistent interface via a near-POJO data object, which acts the same as the managed bean use in my code base (see the GH repo, link below).

I also know there are people out there thinking, "but there's this better way to do this part!" Great! Please show us and/or me how. I also welcome all constructive comments below.

To see my application code to this point, by all means check out my GitHub repository for it. Follow the ReadMe.md instructions to get started. This repository will update once I've completed the next two posts. I still want to cover how to convert XAgent logic to a servlet and creating a basic front-end interface to this servlet with AngularJS. So please stay tuned to this series, as there's more to come!