Also known in some circles as "LotusSphere 15", the 2015 IBM ConnectED conference has now come to an official close. This was my first Connect-usSphere and, making things more interesting, I was named an IBM Champion for 2015 about the time when I knew I would be a speaker (even if it was just a Chalk Talk). I wasn't sure what to make of the conference when I arrived, but I must say, I'm glad for attending some great sessions and meeting up with many great developers in the community (some of whom I had met before, others I had only interacted with in a digital capacity).

As I noted as the theme (that I took away) from MWLUG 2014, there's a significant community effort in "upping our game". While I can't say that this is a unique concept, the execution in the various aspects of application development have been rather excellent and traverse the entire application stack. This is why my session Chalk Talk (see below) was on exactly these concepts:

Ultimately, I would say that 2014 was a great year as an XPager and 2015 looks to be off to a great start. What's coming from the Extension Library, in the OpenNTF Domino API (and other fine OpenNTF projects), and the adoption of the XPages Build Pack and runtime (+Domino Data Service) for Bluemix all mean great and powerful things for us as developers.

[Note: I'm linking to the session descriptions on beyondtheeveryday.com, in which the controller logic is apparently reverting the direct session links back to the all sessions view. I recommend using the search to find the session, or logging into the IBM Event Connect portal and viewing them there, where you can grab the PDF slide decks.]

As you can see, there are many sessions which have great appeal to developers and play to the relevent and dev community trending themes I mentioned above. There were two time blocks in which I didn't find much of interest/relevence to myself, for where my development skill level is. That being said, I was very glad to find myself in some great sessions and discussions with both non-IBM developers and IBMers. I can see why people like LotusSphere.

As with my previous experiences with Lotus/Domino/XPages conferences, the development community strikes me as strong and closely knit. This is evidenced by the passion, effort, level of sharing, and consumption of 🍻 beer that was ascribed to by all in attendance (IBMers, Business Partners, and Customers). I wouldn't have it any other way and I look forward to our next meeting, as ConnectED/LotusSphere or somewhere or something else.

Aside: My Chalk Talk

As you can tell from above, I'm very excited about these topics. You can also tell that I was hoping to provide an awesome demo db which, for better or for worse, was put on hold until after ConnectED. Over the next couple months I'll be finishing the demo app, but while that's ongoing, I'll be posting a few things which my demo app relies on and directly relate to some of what was asked about during my Chalk Talk. So while I wasn't sure I was happy about my session being a Chalk Talk, I can absolutely say, I was very glad for the discussions we did have, very happy for the turn out (especially at 7am EST) we had (they had to bring more chairs into my closet Parrot 2!), and still a bit humbled that IBM and other developers saw fit to let me talk in any capacity, on a topic I hold near and dear to me. We were victims of our own successful discussion, as we went long in the first two parts and we had to cut short our talks on client-side frameworks (I knew Marky Roden and Mark Leusink were going to be covering AngularJS a great deal, which is why the JS frameworks were last) and we still went over on time.

Being a developer often includes a bit of a rebellious nature. So while we had a great Chalk Talk (full of some lead-in by myself on each of the three main topics) with excellent and on-point discussion from virtually the entire room, I still felt the need to show off present in a fashion that could have been akin to a full session... and provide my attendees with many links and resouces relating directly to what I was talking about. Let's face it, you can't just drop a bunch of opinionated interpretations on M-V-C, UI, and client frameworks on people without having something to back yourself up. As such, for those attending, I included a friendly QR code (and bit.ly link) via which they could connect to and view my "slides" (non-primary AV, supporting material only) and have their mobile (or laptop) browsers updated to the one I was on, via a web socket from a Node.js instance running in Bluemix. 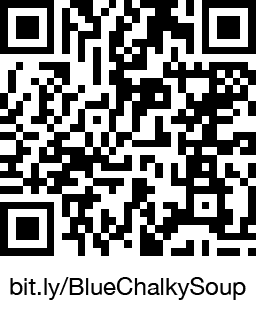 I felt this was good enough to alter my session to Chalk Talk standards, not use room AV (a requirement reiterated by IBM before ConnectED), and still provide a greater amount of resources to the Chalk Talk. In other words, I don't like being told I can't do something :-D.

I used reveal.js for that "presentation", on top of a Node.js/Express app that I hacked together from about three different interpretations (one was straight Node.js, I prefer Express, one updated the change event, but didn't push the partial URL state for concurrency, one was so old it wasn't easily updated to the current npm package versions) that came together the night before I flew out. If you're interested in what reveal.js is, how I assembled things, how easy it was to deploy to Bluemix (very), or just want to view the code (I'll chuck it into a GitHub repository soon, it just needs a little cleaning up), let me know in the comments.