Impatient and want to see the code? Jump down to my Java class.

Generating custom JSON data is, unless you're on a verison of Domino server previous to 8.5.3 UP1, virtually unnecessary. Everything you see below can be fully replicated via the Domino Data/Access Services. The reason for that is the fact that I made use of a simple NotesView iteration pattern to generate and return the application/json data. The missing piece, the whole reason why, is on your application requirements. When you need JSON formatted data in a custom format due to formatting preferences or application logic needs, and it can't just be in a View, that's when this comes into play. So if you start doing what I've done, ask yourself first, can it be just in a View? 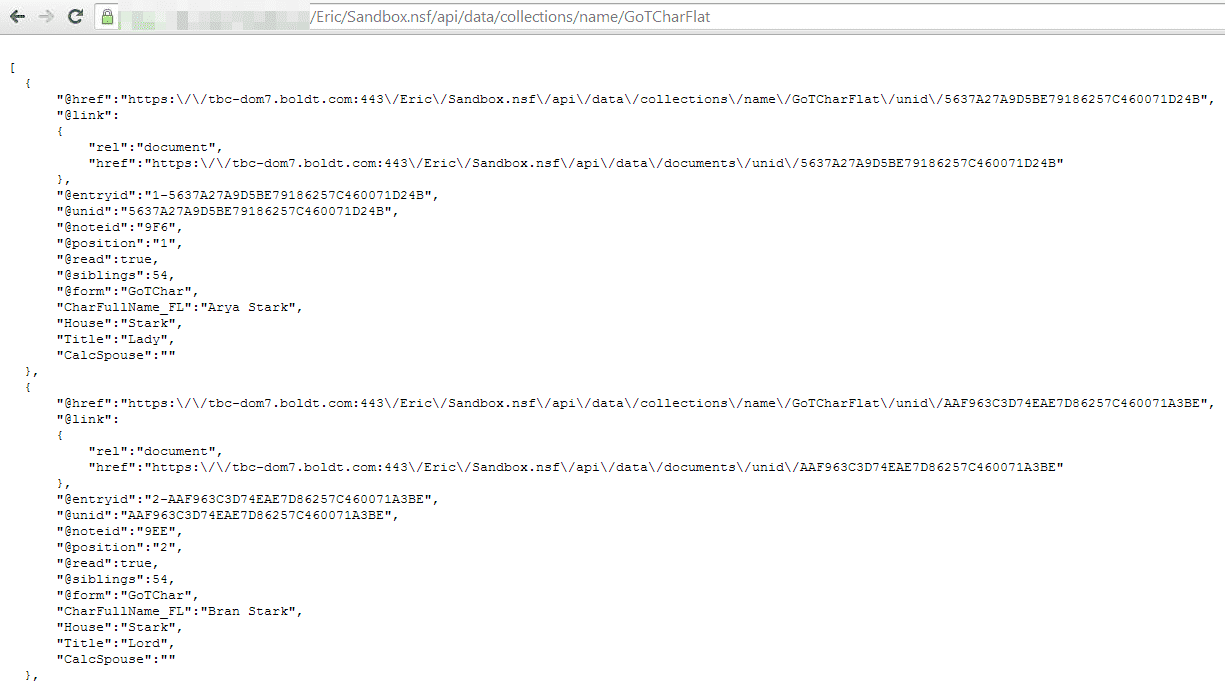 If that's the case, make sure you've turned on Domino Data Services for your NSF and the View you need. If your use case is more specific, that's what follows.

My approach here is super simple, at least as far as the XPages part goes. The only thing I'm using the XPage for is as an end point, in XAgent fashion. Seriously, it's just a hook into the Java method, have a look:

Just invoke the fully qualified package.Class.Method() in the afterRenderResponse and you're ready to go.

Note: I'm assuming you know what they are, what they do, and how to implement them.

Recommended: separate the JSON data build into a method separate from the handler for the XAgent, which does the grunt work of the FacesContext ineraction. I recommend this as you can then just pass the data without using an XAgent, for consumption via server-side (e.g.- extending into another class for bean or POJO use), as opposed to the client-side application logic I'm assuming. No matter how you slice it, you should know how you want to provide and consume your data.

As is the usual, we establish our handles on the FacesContext and give ourselves access to the ResponseWriter; the same as any XAgent. This is how we'll be outputting data. In the ExternalContext response, we set the header information; e.g.- application/json as the content-type, no-cache so as to keep the data from becoming stale, and set the character encoding.

As my try/catch block begins, you'll note (if you're following along at home and building your Class off of mine) that there's an unused variable warning for the paramters. I left this in there so that no one else need repeat my efforts at discerning a good way of getting the URL query parameters; it took a little trial and error for me, as I hadn't seen it done at the time.

I have one single external library/JAR dependency, my good friend com.google.gson. I'm only using JsonObject and JsonArray in this example, as you can see from my imports. For the full example Java method, scroll down to the bottom.

So, here's the application logic portion. For my example, I iterate a View, grabbing two fields out of my semi-improved fake names, full name and title. The semi-improved fake names is a collection of basic info of Game of Thrones characters from the first two books; technically making them Song of Ice and Fire characters (for you fellow Georege R.R. Martin fans). The original Fake Names Database is handy for prototyping against consistently formatted sample data and is available from xpagescheatsheet.com.

Creating a JsonObject with with the Google GSON library can be done a couple ways, in this example, you'll note I've opted to instantiate the object right away and populate the error: true/false and errorMessage: message properties at the end of the try or catch blocks, so as to always return a valid application/json object. As I'm iterating a number of objects with the same format of properties, I shove them into a JsonArray, which gets added under the property of data. This move makes it easy to segregate your client-side error-handling and/or valid response elements, all based on computed visibility of your data response of error==true/false.

The result gives us exactly what we're looking for.

With the right tools, things get easier. Chrome's DevTools give a nice Preview tab to individual network requests. When it comes to json data, it lets us drill down nicely or switch over and view the raw response. Like this:

New to Chrome DevTools? Check out this free primer course from codeschool.com.

In client-side JavaScript, you can programmatically determine whether to take one path or another, but with AngularJS, this gets much easier with ng-show and ng-hide. For those used to computing the visibility property in XPages, similar to <xp:div rendered="#{javascript:myVariable==true}">, this is mildly analagous; as such: <div ng-show="myData.error == false">.

[Update:] as pointed out by paul t. calhoun, a package available, if you're not looking to add the Google GSON jar, or any external library, you can implement com.ibm.commons.util.io.json. The largest difference I saw was the syntax. I'm sure someone more learned could tell me about the mechanics of the two packages. To view my Class with the IBM com.ibm.commons.util.io.json library implementation, check out this gist here.

Here's my method, complete with slightly rambling, but hopefully insightful to a newbie, comments.